“I can see clearly now the rain is gone,
I can see all obstacles in my way!”

The classic song by Johnny Nash was an appropriate way for new DMA CEO Larry Kimmel to open the keynote address at the DMA Convention in San Francisco Oct 9-14. It was that type of positive aura that permeated the entire convention – and Kimmel spearheaded the charge.

Everyone I talked to was impressed with Kimmel’s on-stage persona and personal, down-to-earth message. Gone were the boring industry statistics, and in contrast to keynotes in previous years, this one was a positive, uplifting experience. Kimmel highlighted the prominent role direct marketing now plays in all marketing. But he also reminded attendees that there is still a lot of work to do when it comes to improving the public perception of direct marketing. 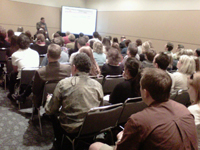 In my estimation, Kimmel is the right person at the right time to head up the DMA. He is one of our own….an agency man. He has rolled up his sleeves and fought in the trenches. He made himself very accessible to his contingency, roaming the exhibit hall and spending time in the DMA booth, fielding all kinds of questions and concerns from DMers like us. According to Beth Negus from Penton Media, Kimmel was very forthcoming to the media as well. Kimmel’s leadership acumen is a breath of fresh air and is a big contrast to the previous DMA regime. 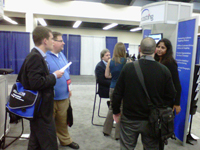 I knew this would be a different DMA Conference from the previous three years from the get-go. Most of our clients and prospects I called prior to the show planned on attending. Estimated attendance figures had the DMA 2010 at around 10,000. That is quite an increase from the supposed 6,500 last year in San Diego. As we entered the convention center I encountered something I hadn’t seen in several years….lines at the registration area! The exhibit hall was teaming with excitement and enthusiasm and on Monday and Tuesday looked busy. The vendors that I talked to for the most part were cautiously optimistic that the traffic from the show would yield positive results. The sessions seemed well-attended and there seemed to be a lot of new talent presenting…including our own President and CEO, Grant Johnson. Grant spoke to a standing-room-only crowd on the “Lucky 13: Proven Tips and Tricks (a Baker’s Dozen’s Worth) for Making Your Copy More Measurable.” We received a lot of positive responses from the session with many follow-up discussions on the calendar already.

In 1967 there was a cultural phenomenon centered in San Francisco called the Summer of Love. Perhaps it’s the city itself or the new leadership of the DMA, but some 43 years later there was certainly a lot of peace, love and direct marketing at DMA 2010.

I’d like to hear from you whether you went to the DMA convention (why or why not) and what you thought of it. Send me a note at rob.trecek@johnsondirect.com or visit us on Facebook.