What was a die-hard Green and Gold fan going to do the weekend after the Packers ended a miraculous six-week run by winning Super Bowl XLV?  This particular fan decided to cure his Packer fix by reading a book written by a member of the Glory Year Packers of the 1960s. 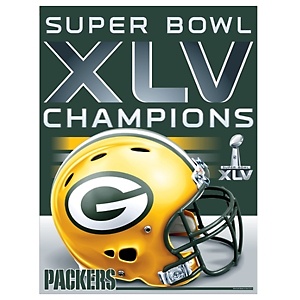 Bill Curry was the next-to-last draft pick of the Green Bay Packers in 1965.  He was a two-time Pro Bowl center and had the distinction of snapping balls to two legendary quarterbacks in his 10 year NFL career, Bart Starr and Johnny Unitas.  He went on to coach in the NFL and three different colleges, work as a college football analyst for ESPN and is currently the coach of Georgia State and a motivational speaker.

In his book, Ten Men You Meet In The Huddle, Curry shares the wit, wisdom and tough love of teammates and coaches.  Learning from such giants as Vince Lombardi and Don Shula; Ray Nitschke and Bubba Smith; Bobby Dodd and George Plimpton; Curry led a football life of nonstop exploration packed with adventure and surprise.

Blessed with irresistible characters, rich personal history, and a strong, simple, down-to-earth voice, Ten Men You Meet In The Huddle proves that football is much more than a game.  It’s a metaphor for life.

While reading the book, I found my adrenaline pumping almost as much as watching one of Aaron Rodger’s pinpoint passes or one of Tramon Williams’ interceptions. I highly recommend the book! 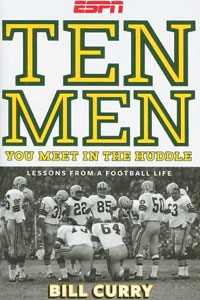 I want to share one of the stories Curry shares in the book that not only changed his football career but changed his entire outlook on life forever!

It was the summer of 1965 and Bill Curry, a young man who grew up in Atlanta, was in his first training camp with the Packers at St. Norbert  College.  Being from the segregated south, he had never in his life been in a huddle with African Americans.  He wanted to be accepted by his new teammates but he didn’t know how.  All his life he had been taught, not by his parents, but by the culture in which he lived that he was different, and better, than other people.  In his heart of hearts he knew there was something wrong with that but he didn’t know how to articulate it or how to behave.

Across the line of scrimmage everyday in camp were Packer greats like Herb Adderley, Willie Wood, Lionel Aldridge and Dave Robinson.  Curry thought they would hear his southern accent, injure him and send him home.  Who could have blamed them?  The country was right in the middle of the civil rights movement and cities were burning.  Because of this tension, Curry didn’t know how to act.

And the most intimidating player on the Packers was All-Pro defensive captain Willie Davis from Grambling University.  At the time Davis was working on his MBA at the University of Chicago and shattered every racial stereotype Curry had learned growing up in the south.

One evening, a week into training camp, Curry was walking out of the dorm and out of nowhere he hears this voice come out of the darkness. “Bill,” the voice said, “I’d like to speak to you.”  At first Curry thought it was God, so he just sat on the grass terrified.  It was Willie Davis.  Curry thought that this was the end of the road.  Davis was going to tell him to go home!

Here’s what Willie Davis had to say to him. “Bill, I’ve been watching you in practice and I think you have a chance to make our team.  I want to help you do that!  So when Nitschke is snapping your facemask and breaking your nose and Lombardi’s screaming in your face and there’s blood everywhere and you don’t think you can take another step…you look at me and I’ll get you through it!”

As Curry writes it was an unexpected, undeserved, unrewarded act of kindness by a great leader and a great man.

He has never forgotten that moment.  Davis not only helped Curry play in the NFL for 10 years, he changed his entire outlook on life.  “I was never able to look at another human being, any human being, in the same way I had.”

Leaders like Davis are the difference between outstanding and successful teams (businesses) and all the other teams.  If you have a leader like Willie Davis no one will beat you!

Have you experienced an unexpected, undeserved, unrewarded act of kindness at any point in your career?  Have you paid that act forward?  I’d like to hear some of your stories.