A couple weeks back I had the distinct pleasure of heading out on a Midwest road trip with our Pres/CEO Grant Johnson.  We were making stops to see clients in Chicago, Grand Rapids, Lansing and Detroit. We journeyed through the great state of Michigan by car and Grant came well prepared with his Ipod packed with 4,000 plus songs.

Grant is not only a thought leader when it comes to marketing measurably, but his eclectic musical taste and knowledge never ceases to amaze me.  He has opened my ears to such singers as Nick Lowe, Lucinda Williams and Delbert McClinton.  His knowledge of music trivia is Rain Man-esque.  For instance: Did you know that Shel Silverstein, author of “The Giving Tree,” wrote Dr. Hook & The Medicine Show’s most prolific hit…”Cover of the Rolling Stone” and Johnny Cash’s song, “A Boy Named Sue?”  Did you also know that actress Faye Dunaway was married for five years to Peter Wolf, lead singer for The J. Geils Band? Did you know that Boz Skaggs and Steve Miller were both classmates at the University of Wisconsin?  I often wonder how he retains all this stuff.

It’s funny what happens when a song pops up that we both can relate to.  It’s usually a Billy Joel, Bob Seeger or Jackson Browne song.  The car turns into one bad karaoke night at your neighborhood bar as we both try to belt out the song in our flat, tone-deaf voices.  When that happens it always reminds me of the scene from one of my favorite sales movies, “Tommy Boy.” 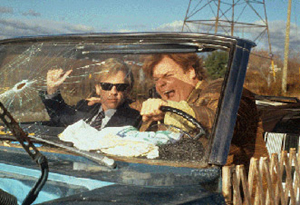 You know the scene, when Chris Farley and David Spade are driving down the road and bawling their eyes out while singing “Superstar” by The Carpenters.  Classic!

Music is a great trigger to help you get into a totally different state of mind.  It got me thinking…what emotions swell up inside your customers when they think of your company?  In other words, what songs are your customers singing about your service?

According to Scott McKain in his book, “Collapse of Distinction,” as marketers and business people in general, we should be striving to create Ultimate Customer Experiences (UCE) for our clients.  We should all try to create differentiation and build distinction!  Not only can we make it easy for our clients and prospects to do business with us, we can and should create an aura of comfort.

I grew up in the 70’s and 80’s in Racine, Wisconsin.  We lived six blocks away from Lincoln Supermarket. It was owned by two brothers and had a total of five aisles.  They knew all their customers by name and were deeply involved with patrons on a personal level. They helped shoppers find items they were having trouble locating, personally cut and wrapped the meat by hand while you were waiting for it, and bagged and put the groceries in your car for you.  The most outrageous service they provided was that they let you buy groceries on a credit system.  If my mom needed something to finish dinner, I would ride my bike over to the supermarket, grab the two or three requested items and told them to put it on the Trecek tab.  The only stipulation they had is that you had to pay it off every two weeks.  I guess cash flow was still important back then.  Can you imagine the big grocery store chains operating in that fashion today?

So I’ll ask the question again…what songs are your customers singing about your service? Hopefully it’s songs like “Good Vibrations” (Beach Boys 1966) or “Shiny Happy People” (REM 1991) and not “Suspicious Minds” (Elvis 1967) or “The Breakup Song” (Greg Kihn Band 1981)!