Our motto at Johnson Direct is “Marketing That’s Measurable.” It’s not just a tagline, though. Among the greatest advantages of interactive marketing is that it is extremely measurable. Return on investment can be clearly calculated by looking at analytics that measure innumerable actions within your website, including how many times you successfully converted a user. A conversion is defined as a user completing an intended call to action. Whether it is selling more widgets or gathering contributions for a charity, or simply filling out a short form, just about every website has at least one desired conversion, and most have many.

Google has now given us “Funnels” another powerful tool within its set of analytics tools. Funnels is a tool that we can use to look closely at the conversion paths through your website. A conversion path is a known path to a completed call to action. If your site is an e-commerce site that sells lighting fixtures for example, there are known paths to the sale of a particular type of fixture. A user might use traditional, catalog-type navigation or perhaps a project type wizard to find the product. The user then adds the product to the shopping cart and conversion is accomplished when checkout is successful. Or, perhaps all we want is a user to sign up for an email newsletter so that we can capture valuable information to use in further marketing efforts. The conversion path to the email signup can be defined quite easily.

Designing for conversion and redesigning for greater conversion (conversion optimization) in a website can be very complex but here is a basic introduction to the concept. Initially skilled web designers will use best practices, user experience testing and many years of experience to create clear and easy paths to conversion.

Users come to your website for various reasons, and they typically have a goal when they arrive to find a particular piece of information that is relevant to them. The faster and easier the user arrives at that information and completes their goal, the better reflection on your brand and the more conversions you will have. Web browser technology and a better understanding of user behaviors has led to major advances in web design that allow users to intuitively take control over your information to achieve their goals quickly and easily. User experience designers are now employed to help create designs that convert the maximum number of users through better usability design.

The path to conversion can be visualized as a funnel. The wide end of the funnel is where users enter the site. The narrow end is where they accomplish conversion. It is to be expected that a certain number of users will not convert to the desired calls to action. Perhaps, for example, they visited the site solely for informational reasons. Conversion design is the art and science of passing more users through the narrow end of the funnel by “widening” that end through improved design.

Upon launching a new site or when a site is not performing as well as expected, many companies engage only in driving more users to the wide end of the funnel through search optimization, ad campaigns, local search, banners, paid search and the myriad other tactics of gathering more traffic to the website. This can be visualized as widening the top end of the funnel. 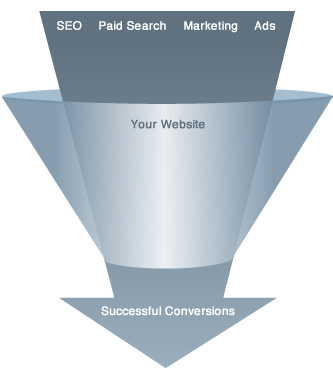 While those efforts are of course important they have a couple disadvantages. First, they are expensive. Second, with the exception of search optimization, their efficacy is over when the initiative ends. A Google ad-words campaign won’t garner any new traffic once the budget has been reached and the ads stops running. Many companies launch a website and then stop working on the design. Wise ones do not. They continue to monitor the website’s analytics to evaluate how well the site is performing then use that information to engage in conversion optimization.

What many companies fail to look at is ways of enlarging the smaller end of the funnel by converting more visitors once they are on the site and in turn nurture more loyal customers. As a company that engages in designing for conversion and conversion optimization, Johnson Direct is skilled at identifying areas of the site that are not performing, rigorously testing those areas, then creating a redesign that drives more conversions, often dramatically more. A rather simple adjustment to a form for example, yielded 600% more conversions. A redesign of a shopping cart, a place where 59% of buyers abandon the conversion process*, yielded 28% more conversions or over $1 million in annual sales; and there are many similar examples.

Google Funnels – a new tool in the arsenal.

We use many tools in the practice of conversion optimization. Many of those, such as those used in usability testing, are tools designed to enlighten us to user behaviors in the site. The first determination, however, is to discover where the path to conversion is being interrupted. Google’s “Funnels” aids in that very determination. By defining the conversion paths in your website and the desired conversion we can use Google Funnels to view where a user debarks from the conversion path.

While determining abandonment points was possible in the past, it required assembling and analyzing many fragmented pieces of data. In classic Google fashion we now have a new tool that does much of this heavy lifting. Once you are aware of where a user is leaving the conversion path you can begin the work to improve user abandonment at that point through the valuable implementation of conversion optimization.