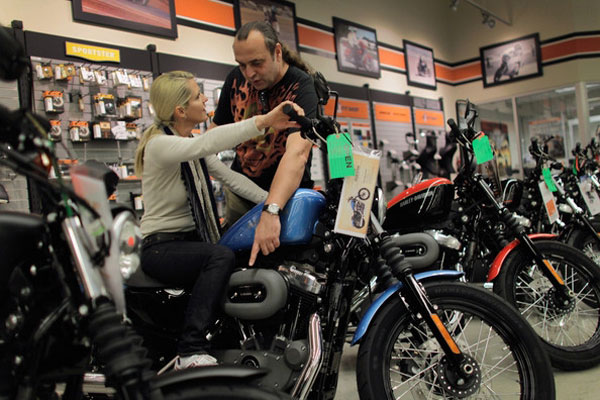 I had the pleasure of hearing a presentation by Mark Rodgers earlier this year at a breakfast meeting. Mark is a principal partner of the Peak Performance Business Group, which helps clients accelerate their sales, marketing and management efforts, achieving astonishing results. He works with a lot of Harley-Davidson dealerships across the country. I just got around to reading the book he was pitching, “Accelerate The Sale, Kick-Start Your Personal Selling Style To Close More Sales, Faster.”

The book is filled with practical knowledge and uses what we call at Johnson Direct “Story-Selling” to help push his sales philosophies. The following is one of the better ones that he shares in the book.

I’m going to see what the other guys have.

The customer, in his early 20s, had brought his father for reinforcement. Dad didn’t say anything. He didn’t have to; his facial expression said it all: Don’t mess with us.

If you’ve spent two minutes in the profession of selling, you’ve probably heard customers threaten to go somewhere else, to compare you with others, to see what else is available. This causes fear and panic in most salespeople, dejection and depression in others. But not in motorcycle sales manager Ken Fisher.

“Hang on a second,” Fisher enjoined. “I have an idea.”

He proceeded to the dealership locker room and changed out of his logoed staff shirt with nametag and into his street clothes-so he looked like any other person who might be running errands. When Fisher rejoined his stunned prospects back on the showroom floor, he announced, “I’ll go with you.”

“They looked at me like I was crazy,” Fisher remembers. “I told them if the boy found a bike he wanted, who better to help him than a sales manager at a motorcycle dealership.”

Fisher drove father and son down the street to the next motorcycle dealership. After five minutes in the store, no one acknowledged them, so Fisher started to talk bikes using the other dealership’s inventory. Ten minutes passed and still no one had acknowledged them. At the 15-minute mark, the son looked at Fisher. “Let’s go back to your place,” he said. “We want to buy from you.”

Fisher didn’t get frustrated. He didn’t even get angry. He used the natural flow of the sales exchange, more than a little creativity, and some chutzpah to win the business. He was confident he knew the product, secure in his relationship with his buyer, and , best of all, had no fear of failure. He had nothing to lose, so why not? He was unconventional and assertive while not aggressive.

This is one of the better sales stories I have ever heard. Fisher didn’t get discouraged or angry. He took “the bull by the horns” approach and showed more than the normal amount of creativity to win the business. He was definitely confident in his product knowledge and best of all, had no fear of failure. He was unconventional and assertive while not aggressive that led to success.

Another aspect to Fisher’s approach that enabled him to close the deal is what Scott McKain calls the Ebert Effect. McKain is the author of a brilliant book that I reference quite a bit entitled “Collapse of Distinction.” McKain had the chance to ask Roger Ebert directly why most movie critics give phenomenal reviews to very weird and strange foreign films. Ebert explained that most movie critics view 3 movies per day! Those little offbeat, quirky, odd foreign or independent films-they capture attention because they are a bit different. When you are overwhelmed with such boring similarity, you begin to perceive that different is better.

The Ebert Effect
When people, from their perspective are inundated with indistinguishable choices, they perceive a product, service, approach or experience with a specific point of differentiation to be superior.

In conclusion, Fisher used a lot of techniques to close the deal including confidence, extreme product knowledge, building repoire with his prospect, no fear of failure and using an unconventional tactic that produced differentiation.

If this post triggers any good memories for you, we’d love you to share some of your Greatest Sales Stories!